Home > Discography > Albums by Ferrante > A Touch of Art

A Touch of Art 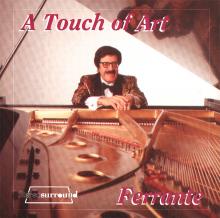 Art Ferrante first sat down at piano at the ripe old age of two. At the age of six he began his first lessons, and then at the age of 7, he played his first concert performance. When he was 8, he entered the Juilliard School of Music in New York. Ferrante graduated with Honors at the age of 19 and was awarded the Memorial Loeb Fund Prize and the Coolidge Chamber Music Prize for highest achievement. At graduation night ceremonies he was the student selected to perform with Juilliard Symphony Orchestra, where he played the Liszt Totentanz.

Upon graduating from Juilliard, he took a position as the accompanist for the internationally acclaimed dancer Paul Draper. While working with Draper on the filming of the Paramount Pictures film "Blue Skies," Ferrante met the immortal Irving Berlin, who was so impressed with the young musician that he offered Ferrante a permanent position on the musical staff at Paramount. In what was a very difficult decision for a young unknown, Ferrante declined Berlin's very generous offer in favor of chasing his dream to become a star performer. This was a precarious notion at best, but since childhood he had entertained the dream of teaming with another pianist to perform music written especially for two pianos.

Shortly After this incident, Art Ferrante would realize his dream. He combined resources with longtime friend Lou Teicher and together they formed Ferrante & Teicher, one of the most successful performing partnerships in the history of show business. Their 37 year partnership produced an astounding 183 albums that sold an even more astounding 55 million copies. The pair earned 22 Gold records and had four Gold singles. Their recordings of "The Apartment," "Exodus," "Tonight" and the theme from "Midnight Cowboy," all achieved Gold record status.

Ferrante & Teicher were also one of the most active touring attractions in the world. In 37 years, they logged over a million miles, performed more than 4,000 concerts, performed with every major symphony orchestra in the U.S., and very frequently broke all house records for attendance. They were also invited to perform at the White House for presidents Kennedy, Nixon, and Reagan. Beginning with the earliest days of television, the duo became a regular in the living rooms of America. They appeared on literally every major T.V. personalities show including Ernie Kovacs, Ed Sullivan, Johnny Carson, Perry Como, Dinah Shore, Dean Martin and Danny Kaye.

In 1988, Lou Teicher decided the time had come to retire. Art Ferrante initially decided to do the same. Fortunately for music lovers the world over, Ferrante's retirement lasted a little over 4 weeks. Now through the miracle of modern technology, Ferrante is able to continue recording the two piano sound that the world knows and loves. The difference is that instead of Ferrante & Teicher, the sound is now created by Ferrante & Ferrante. By using modern recording techniques, Ferrante is able to first record the part he would have normally played first and then go back and record the second piano part later. The sound of the orchestra is then added to the piano track. In this way, Ferrante is able to continue to create the lush two piano sound that his audiences have come to love over the past 40 years.

Although this is only Ferrante's third album as a solo artist, he remains optimistic. When asked the question "How are you going to top Ferrante & Teicher's phenomenal 37 years of success?, he always replies "Ask me in 37 years!"