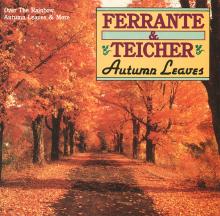 This is a reissue of a CBS budget-priced Lp that originally appeared on the Harmony label in 1969 with a different cover and track sequence. It's a horrible album and should be avoided by most fans. It's really not worth more than the $1.50 or so that used copies are selling for at Amazon.

The pianos on these tracks originally appeared on ABC-Paramount Records. Strings were added long after F&T left the label. I don't know why these recordings ended up at CBS. Incidentally, ABC-Paramount had their own "Autumn Leaves" compilation (ABC-558/ABCS-558) and I believe they added strings to those, too!

Instead of butchering these recordings, intended as piano solos in monaural sound, Sony Music — owner of Columbia —  should simply have reissued the early 1950s Columbia albums Hi-Fireworks, Me and Juliet & Can-Can and Continental Holiday with the original cover art, liner notes and perhaps recording dates. They could have charged full price, satisifed record collectors and paid tribute to Ferrante and Teicher in the process.