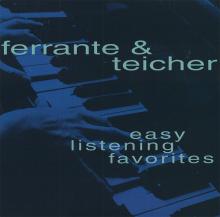 This 1993 compilation features 10 of the 12 tracks from 1958's Heavenly Sounds in Hi-Fi. For reasons unknown, they omitted "Stardust" and "The Moon Was Yellow."

The original album was recorded for ABC-Paramount Records, which was later acquired by MCA Records. This album, like the entire Westminster and ABC-Paramount catalogs of F&T albums, should have been released as a collectible — with its original cover art, liner notes, recording dates and a few words about the early sound experiments performed by Ferrante and Teicher. With the resurgence of "space age pop" in the early 1990s, the timing would have been perfect for an intact re-release.

Instead, this was a budget-priced compilation intended to fool customers into thinking they were purchasing "easy listening" favorites like those from the United Artists years. The way it was packaged only diminishes the F&T legacy as it was marketed for the wrong audience. The typical buyer, seeking what used to be broadcast on "beautiful music" stations, would likely have been disappointed and, perhaps, reluctant to buy more F&T titles.