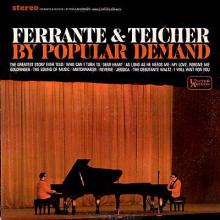 FERRANTE AND TEICHER’s “BY POPULAR DEMAND” is an album which simply had to be issued by United Artists Records. The reason is a very simple one — the overwhelming success of a predecessor, “The People’s Choice” — a collection which quickly catapulted into the nation’s best-seller lists and received tumultuous acclaim from both the critics and the public alike. Much like “The People’s Choice,” “BY POPULAR DEMAND” spotlights choice morsels which have recently been elevated into the category of standards, old favorites which have had a rebirth of popularity of late, and a few gems which have been single out for very special applause by the packed houses which are inevitably preent at the Ferrante and Teicher concert appearances throughout the nation.

The Broadway stage and motion pictures have contributed a majority of the better songs that have come forth of late, and it is to these that Ferrante and Teicher turn for a goodly portion of the program contained in “BY POPULAR DEMAND.” The epic George Stevens production of “The Greatest Story Ever Told,” that box office giant “Goldfinger,” the utterly charming “The Umbrellas Of Cherbourg,” and “Dear Heart,” with music by Henry Mancini, are among the films immortalized for posterity by these talented instrumentalists and their lush string-filled orchestra, conducted by Nick Perito. Included among the Broadway melodies showcased by Ferrante and Teicher are tunes from such hits as “Fiddler On The Roof,” “Oliver,” and “The Sound of Music.”

Here then is an album that is indeed aptly titled. For “BY POPULAR DEMAND” is precisely what you have requested. It is FERRANTE AND TEICHER purveying their keyboard magic, so ably supported by the best musicians in the land, in a sparkling demonstration of the distinctive touch that they and only they can give to a dozen of the most winning melodies a listener could ever want to hear.