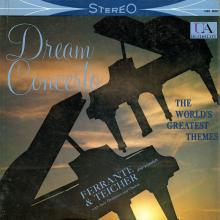 “A dozen of the best tunes ever written by man.” That’s the apt description given to this album by the two men who created it — Arthur Ferrante and Louis Teicher.

And when you hear the unique achievement of the orchestrations: the plush sounds of the twin Steinways, the shimmering of the strings, the beat of the rhythm section, the blending of the voices with the instruments, with every selection recognizable as soon as you hear the opening bars of each tune, you’ll agree that these are tunes which you have heard and hummed and sung for many years. In fact, you’ll recognize them all as songs that have had “popular” titles and popular success in past years.

What is completely new, however, is the approach to this familiar music. The amazing versatility of the tonal coloring of the orchestra, the melodic yet distinctive and stirring voices of the pianos, the velvety sound that gushes forth from the ensembles. Not only are the selections ideal for listening, but should you want to head for the dance floor, there’s the beat for dancing.

But getting back to the music. Through the ages the music has endured has taken on the title of “the classics.” Moreover, there are certain pieces and themes among these classical selections which in themselves have taken on new forms and become “popular music” — in spite of their classical origin.

It is from this rich reservoir of “pop” classics that Ferrante and Teicher have taken the music for this “Dream Concerto” album — each selection is one that you will immediately recognize because the simplicity and beauty of the melodies are what have caused them to live on, generation after generation, despite the constantly changing music tastes of the public.

BUT Familiarity itself does not make for interesting listening. It is the orchestration and performance that make these 12 selections so outstanding. First, take the technical “know-how” of Ferrante and Teicher. Not only are they favorites with concert audiences across the nation, they are indeed the world’s most-recorded duo-piano team. And through their many recordings and numerous radio and television appearances they have won a large, cosmopolitan audience of all ages.

With the release of their single record “Dream Concerto” Ferrante and Teicher extended their audience span into a new area — that of the young adult who demands more than just a tune — who wants good music background, something that’s singable or hummable, or can be danced to — all bound up in one. A week after the record was released, it began to “hit the charts,” which in the vernacular of the music business means that a hit is in the making. Because these “charts” are the popularity polls in popular music. They get their votes from the disc jockeys and juke box operators — the people who are in direct touch with the listening public. And both “Dream Concerto” and “Lover’s Symphony” got the votes right from the release date of the record. The success of this single record has served as the inspiration for this collection of all-time favorites taken from the music of such famous composers as Tchaikovsky, Rachmaninoff, Chopin, and Beethoven.

And certainly no two people could be more qualified than Arthur Ferrante and Louis Teicher to prepare these excerpts of great works for popular consumption. Both Ferrante and Teicher have spent the greatest part of their young lives studying music.

From the time Arthur Ferrante was six years old until he was graduated, he was a scholarship student at the renowned Juilliard School of Music in New York City. During his studies there he won every award the school had to offer. Louis Teicher, also hailed as a child prodigy, was brought to Juilliard before he was six, and his progress was so remarkable that he was graduated at the age of 15, one of the youngest students in the history of the college to have finished the curriculum. Louis also took his shares of honors at Juilliard. Both extraordinary musicians, Ferrante and Teicher were invited to serve as faculty members at Juilliard after graduation and did act in this capacity for several years.

Important as musical studies may be, the by-product of their Juilliard years eventually became the product of their attainment: having played piano together in school since they were about six years old, the two expert musicians decided to combine talents and thus, in 1948, was born the duo-piano team of Ferrante and Teicher.

They have appeared with leading symphony orchestras in America and in the nation’s top concert halls in recital programs. When traveling on concert tours, they are accompanied by a driver and a big red truck which houses their two Steinway grands. They have been acknowledged superior musicians by the nation’s serious music critics, and they have been hailed as innovators by other music writers for the unusual effects which they have produced on some of their records.

However, in this recording, there are no gimmicks. The pianos and the music speak for themselves, as do the superb arrangements by Arthur Ferrante, Louis Teicher and Don Costa. Nick Perito conducts the orchestra and chorus.

This was Ferrante & Teicher's debut album for United Artists Records. Within months of its release, Ferrante & Teicher enjoyed great success with their hit single "Theme From The Apartment (Jealous Lover)," prompting United Artists to repackage the album as The World's Greatest Themes (UAL-3121/UAS-6121) to include "Theme From The Apartment" and it's B-side, "Lonely Room." "Dream Concerto" and "Lover's Symphony" were cut from the newly packaged album.

Scott W. Smith's discography lists the stereo catalog number as UAS-6103 but, according to label research site Both Sides Now, that number was used for an album titled Yes Indeed! by the DeJohn Sisters (UAL-3103/UAS-6103).