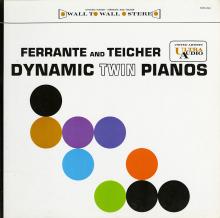 These notes copied from the web - to be formatted later...

About FERRANTE and TEICHER

Ferrante and Teicher have been purveying their delightful style of twin piano work for many years. Both with serious classical backgrounds, they turned their talents to bright popular twin piano work early in their careers and ever since have enjoyed concert hall and record success as is attested to by their hit recording of "The Theme From The Apartment" on United Artist Records, the parent company of Ultra Audio. Ferrante and Teicher are the leading exponents of what are commonly called "prepared pianos." These are pianos in which the sound is altered to create effects the instrument itself is not capable of producing. Via the prepared piano technique Ferrante and Teicher have been able to develop exciting and striking musical effects that enhances their performances and makes them unique among piano duos. This album represents some of the most imaginative and dazzling sounds yet created by the artists.

Some of the effects that you can hear in this album are extremely complex and took Ferrante and Teicher years to develop. And the pianists are still keeping the manner in which they develop some of these effects a deeply guarded secret. However, the pianists have given names to many of the effects they are able to produce on their prepared pianos, and are willing to tell how they produce them. When Ferrante and Teicher started work with prepared pianos, they realized the need of a fresh set of musical terms to identify the sounds they were creating. This served to relieve the problems of communication between the artists and the recording engineers.

Here is a list of the terms used by Ferrante and Teicher to identify some of their special effects:

STICKS—Small pieces of wood or metal are placed on the strings to produce a sound similar to a harpsichord or honky tonk piano.

MUTES—Wedges of rubber, felt, or paper, are inserted between the strings. This allows the notes played to be heard without any ring. The effect is similar to a bongo or conga drum, or at times, even to a caliope calliope. However, in many cases the sound cannot be compared to any musical instrument.

BONES—This sound is achieved in similar fashion to mutes except for the place­ment of wedges producing a sound like a tuned bongo, xylophone or temple block.

STRUMS—The strings of a piano are strummed with the finger or a pick of varying stiffness. This produces the effect of a harp, guitar or zither.

These terms are used to describe the highlights of various selections in this album.

Ferrante and Teicher do not try, in developing their unusual piano effects, to imitate the sound of other musical instruments. Their intent has been to derive as many valid sounds from their prepared pianos as their imaginations make possible. That they have vivid imaginations is brilliantly illustrated in this new album, an adventure into "The World Of Recorded Sound."

Starts hot as strums (panning from left to right) start the generators rolling. The sticks (alternating right and left) begin generating the current musically followed by mutes and bones (alternating from right to left). The sparks fly with the strums and mutes (alternating channels) until the mutes (left and right) build up the power for the sticks (right and left) to discharge the ending.