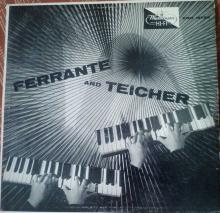 Lp released in 1955. This album is listed with the title Encores! in Scott Smith's discography.

THE ARTISTFerrante and Teicher, one of the most exciting and dynamic piano duos in the world of music today, have been playing together professionally for about a decade. Unlike any other pair of duo-pianists, however, Ferrante and Teicher had played together for many years before beginning a professional career, having met as youngsters of six and nine at the Juilliard School of Music, where both were pupils of Carl Friedberg. Almost from the very beginning of their studies at Juilliard they worked together, studying under ensemble teachers.

For some time after graduation from Juilliard, Ferrante and Teicher pursued separate concert careers, playing together only for their own pleasure. In 1947, however, they decided to form a team, and since that time their career has been a joint venture. They began this new career by specializing in popular music, and appeared in some of the better New York night clubs — Spivy’s Roof, the Blue Angel, the Ruban Bleu, and at several Miami Beach nightspots. They then decided to return to the concert field for which they had spent so many years preparing.

In their first series of concerts Ferrante and Teicher presented programs that ranged from pre-Bach composers straight through to contemporary music in both the classical and popular fields — Ravel and Gershwin, Shostakovich and Kern, Debussy and Rodgers & Hart. These programs were such an outstanding success in every city they visited that Ferrante and Teicher were booked for 139 concerts for their second season. Each year since has brought greater and greater triumphs, and the Ferrante and Teicher “Vanette,” a Ford truck which has been redesigned to hold two Steinways, has become a familiar sight on highways in every corner of the country. Annual six-month tours have made Ferrante and Teicher the most widely-travelled duo-piano team in the world.

In addition to their many concert performances, Ferrante and Teicher have appeared as soloists with many of the leading American symphony orchestras, including the New York Philharmonic, the Rochester Symphony, and the Detroit Symphony, and their frequent radio and TV broadcasts have included appearances on the Carnation Hour, the Garry Moore Show, the Steve Allen Show, and the Ernie Kovacs Show. For a year and a half they had their own ABC Piano Playhouse Show.

Some years ago Ferrante and Teicher began to experiment with their pianos in an attempt to discover how great a range of musical sounds other than the familiar ones could be drawn from the instruments. The results of these experiments have made the Ferrante and Teicher “gimmicked” pianos famous for an extraordinary variety of sound effects that add greatly to the tonal scope of their arrangements. With little mutes, small sticks, and various other unorthodox pieces of equipment and procedures which they prefer not to reveal, they make their pianos produce sounds no other pianos can, and the success of their efforts has been borne out by the enthusiastic response of concert audiences and critics, and by the many thousands of record buyers who have made their Westminster “gimmicked” recordings (Soundproof!, Soundblast!, and Adventures in Carols) national bestsellers.

Their interest in unusual sound effects has been an important addition to the music-making of Ferrante and Teicher, but it has not led them to give up the classical two-piano literature which has been the center of their musical lives since childhood. On this recording they are heard in conventional two-piano versions of favorites from the standard classical repertoire, most of these brilliant arrangements having been made by Ferrante and Teicher themselves. Along with the other recordings listed below, both “gimmicked” and not, this new album proves that Ferrante and Teicher are one of the finest piano duos in whatever style they choose to play.

THE RECORDThis is a monaural recording, processed according to the R.I.A.A. characteristic from a tape recorded with Westminster’s exclusive “Panorthophonic” ® technique. It may be played on any phonograph — either monaural or stereophonic — designed to play microgroove (33-1/3 RPM) recordings. The multiple channels of stereophonic equipment will enhance the sound of this monaural recording, making it richer and more brilliant. To achieve the greatest fidelity, each Westminster record is mastered at the volume level technically suited to it. Therefore, set your volume control at the level which sounds best to your ears and, for maximum listening pleasure, we recommend that you site at least six feet from the speaker. Variations in listening rooms and playback equipment may require additional adjustment of bass and treble controls to obtain NATURAL BALANCE. Play this recording only with an unworn, microgroove stylus, preferably diamond.

Many thanks to Chris Locke for providing photos and liner notes from the original release. I finally found a copy of the original Westminster Lp and will eventually produce a better scan of the album cover.

The original album, simply titled Ferrante and Teicher, was reissued by ABC-Paramount as Popular Classics with a new cover and liner notes. It was available in both mono (ABC-437) and "technically augmented" stereo (ABCS-473).