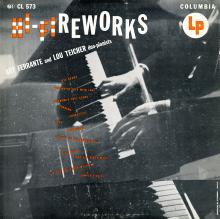 Lp originally released on September 6, 1954. Scott Smith's discography not only shows this as 1953 but that it precedes Me and Juliet & Can-Can and Continental Holiday. My guess is that the recordings in this album were made first, in 1953, but not released until after the 10" Lps as they are referenced on the back cover of this album.

In listening to this collection, it is essential to keep one thing uppermost in one’s thoughts: no matter what one hears, remember that the sounds issue from two pianos played by Art Ferrante and Lou Teicher, and from those two pianos alone. It may be necessary to mutter this simple fact aloud from time to time, but once the first step is mastered, the rest of the construction falls easily into place.

With this in mind, the nature of the collection can be considered, and here it is perhaps easier to define what it is not than what it is. It is not, then, a collection for those whose pianistic ideas are bounded by the artistry of Serkin and Casadesus; it is not even for those who admire Liberace. Nor is it music for those who like their piano-playing in any kind of a traditional mold. On the other hand, listeners who think that John Cage has stretched the prepared piano to its limits are in for a surprise, too. True, the original inspiration for the kind of tinkering with pianos which Ferrante and Teicher employ in this collection came from techniques created by the well-known young American composer, but there the comparison ends. This is music for fun, music for the sheer delight of unexpected and unusual sounds, music for those not averse to an uninhibited leavening of wit, music for those to take pleasure in experimentation just for the fun of it.

With these cautionary words out of the way, it is safe to go ahead and revel in the keyboard mayhem that Ferrante and Teicher create. The wild and wonderful sounds they create arise from the two pianos and the free use of magnetic tape, wherein passages may be re-recorded and tempered with to the satisfaction of the pianists. It is clear from the outset that neither Mr. Ferrante nor Mr. Teicher will accept any back talk from their pianos, and if the instruments are incapable of delivering the effects required, the performers will cheerfully beat on the lid, pluck the strings like a harp or thwack the music rack until they get what they want. Recorded with Columbia’s Hi-Fi Plus techniques, the sounds are so real that the listener can almost feel the vibration of the strings, and the arrangements are so amusing and startling that they might almost be called a new “new sound.”

Although it might be felt that Ferrante and Teicher harbor some dark grudge against the piano for not being able to sound like a full orchestra, they are in fact devoted to the instrument and both are virtuosi at the keyboard. Although this collection is devoted to their knock-about approach, they have also recorded works in a charming and lyrical vein, notably their medlies of music from Can-Can and Me and Juliet and a musical salute to Europe in Continental Holiday, and well-known as serious concert artists. They met when both were students at New York’s Juilliard School of Music, when they were six years old. Both were prodigies and were two of the youngest students ever accepted by that august institution. Almost from the beginning, they began playing together and eventually combined their efforts to work together under ensemble teachers.

After graduation, they made a brief concert tour together, and then returned to Juilliard as members of the faculty, where they combined teaching with a modified concert schedule. In 1947, they began a series of cross-country tours presenting programs that ranged from pre-Bach composers up to and including present-day popular masters. So successful were these programs that the following year they were booked for 139 concerts, and since that time they have become one of the most popular piano duos in the country. Appearances with the Philharmonic-Symphony Orchestra of New York, the Rochester Symphony, the Detroit Symphony and many others followed, and they have been heard on many radio programs, including Piano Playhouse and Percy Faith’s program.

Unhappily, the music in this collection can be heard only on records and would be impossible to recreate in live performances. It has a life of its own, however, a stinging vigor that attracts immediate attention and causes chuckles of delight to unfold. Quite apart from the remarkable sounds that Ferrante and Teicher elicit from their instruments, there are frequent and irreverent quotations from the masters flowing around through the fabric of the basic materials, often shedding new light on the songs and certainly setting up a different train of associations.

Ferrante and Teicher have clearly set up one of the most amusing and, from an instrumental point of view, challenging programs that can be imagined for the piano. Truly hi-fi, and almost literally 3-D, it offers delight and wonderment for anyone interested in free-wheeling explorations in popular music, or, indeed, anyone who is simply out for a good time with the phonograph.