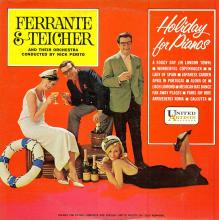 Ferrante and Teicher today are probably the world’s best known duo piano team. Their success as concert artists and as recording artists have made them international favorites. Over the past few years the piano team has had such million selling hits as “Theme From The Apartment,” “Exodus,” and “Tonight,” from the film “West Side Story.” In that same period of time they have played concerts in every major city in the United States as well as college campuses from coast to coast. Much of Ferrante and Teicher’s success has been built upon movie themes. They have been called the best ambassadors for movies since the great days of Will Rogers, Clark Gable and Gary Cooper. Their most recent hit, “The Love Themes From Cleopatra,” was not only one of their biggest selling albums, but a single, “The Antony and Cleopatra Theme,” is shaping up as one of the year’s top chart entries. In this new album Ferrante and Teicher show that they can infuse new life into other than movie themes. The selections in this album include their bright and cheery interpretations of songs from around the world, from “Paris Joy Ride” to “A Foggy Day In London Town.” In this LP they take you on a merry and exciting trip to some of the most romantic and exotic countries of the world, on a musical holiday that covers the globe. If you can’t take that trip to Europe this year, then listen to the sparkling sounds of the Ferrante and Teicher pianos as they perform these familiar songs with the excitement and style that marks their piano work. And to those who have made the Grant Tour, this collection will rekindle fond memories.