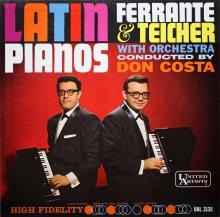 Lp released in 1960. Most of these arrangements were re-recorded for the album Dos Amigos in 1988 (later reissued as Hot Latin Nights).

The road to stardom for Ferrante and Teicher was a long one which covered many highways, and considerably more byways, roads littered with peaks and valleys until they merged into the one with the Rainbow at the end. The turn which took them to the final straightaway was "The Theme From The Apartment," the impetus which carried them to the Rainbow was, of course, "Exodus."

Recognition of Ferrante and Teicher as the outstanding piano duo of the Sixties comes from adults and Teens alike, from critics and fans, and from those who earn their living as musicians. Their versatility is unquestioned, their musicianship unchallenged.

Listen, then, to the twenty most talented fingers now covering the twin keyboards as they bring you a program Latin in musical content, complete in listening contentment.

An alternate front cover was issued stating "Orchestra conducted by Nick Perito" and, on the monaural cover, showing an incorrect catalog number (UAL 3198). The back cover showed that Don Costa conducted the orchestra.