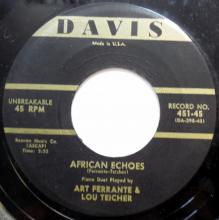 All four titles were discovered on a reissue Lp by another F&T fan. Kurt L writes:

F&T's first single was used on one of those Guest Star budget LPs.  I'm pretty sure that was a Synthetic Plastics, NJ, budget label (Spin-O-Rama, Diplomat, etc.). The first song on each side would have been F&T, with the remainder by a studio artist (in this case it says Philips & Burns with the Metropolitan Strings -- if they actually exist).

Additional background information can be found in excerpts from The Melody Man: Joe Davis and the New York Music Scene, 1916-1978 (Bruce Bastin with Kip Lornell):

Page 291: In the fall of 1962, he leased the four titles he cut with pop and light classical pianists Ferrante and Teicher – for United States rights only – to Synthetic Plastics Record Corp., which had office on New York's 8th Avenue, close to the old Mastertone studios. The interest in leasing Davis's material, however, didn't seem very brisk.