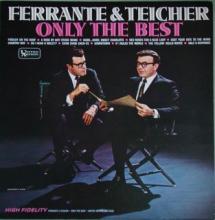 It is not uncommon for members of a record company staff to spend long hours striving to come up with a meaningful title for a soon-to-be released album. Such was definitely not the case for this particular collection. For when the best popular instrumentalists in the business and the best of the recent crop of songs are combined, it is only natural that the resulting set should be named “ONLY THE BEST.” The instrumentalists are, of course, FERRANTE AND TEICHER who are indeed one of the wonders of the disc industry. Every ninety days or so, there is a new FERRANTE AND TEICHER release — and as regularly as clockwork, this item immediately hurtles on to the nation’s best-selling lists. There are very few, if any other artists, whose track record is so impressive. Quite naturally, there is a good reason for this amazing popularity. It is the FERRANTE AND TEICHER trademark—lush, string-filled music, imaginative arrangements, and the bright, airy, spirited and distinctive-sounding piano magic of the talented duo. The repertoire in “ONLY THE BEST” is exactly what the title implies — the tops of the newer melodies. Some come from Broadway, such as “Fiddler On The Roof,” “Do I Hear A Waltz?,” “If I Ruled The World” and “Half A Sixpence,” others come from the world of motion pictures such as “Hush… Hush, Sweet Charlotte,” “Chim Chim Cher-ee,” and “The Yellow Rolls-Royce,” still others are strictly “pop” — culled from the top ten — like “Downtown,” “Red Roses For A Blue Lady,” and “Cast Your Fate To The Wind.” United Artists Records proudly and confidently offers for your listening enjoyment, “ONLY THE BEST.” There are twelve songs — each of them comparative newcomers and each of them already on the way to becoming an evergreen. And then there is FERRANTE AND TEICHER — who have already become giants of the musical world, but whose popularity continues to grow and grow and grow — so much so that in addition to ranking at the very top of the list of album sellers, they are now considered one of the country’s foremost concert attractions. One listening to “ONLY THE BEST” will vividly indicate why.