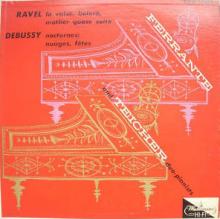 The following notes were from the ABC-Paramount reissue, titled The Artistry of Ferrante and Teicher. They appear to have been written after Ferrante & Teicher's success at United Artists. If I ever find the original Westminster Lp, I'll reproduce those notes here.

Although they have performed as a double-piano team in virtually every corner of the globe, it was only recently that the full potential which lay in the gifted hands of Arthur Ferrante and Louis Teicher was realized by an eager public. Not until they struck the vast general fancy with their recording of the theme music from a widely-heralded motion picture did Ferrante and Teicher begin to make the universal impact for which they had been striving ever since the two had met as child prodigies at the famed Juilliard School of Music in New York.

This would be a sad commentary indeed, had not the team achieved a gratifying measure of success through the years, both with their remarkable performances of the classics in the traditional style which characterizes true artists, and the electrifying experimentations in sound which delighted and amazed audiences throughout the world. Employing every facet of their pianos, Ferrante and Teicher produced sounds and musical effects far beyond the normal concept of the keyboard itself, plucking the strings, striking the soundboard, using ingenious muted effects across the strings, etc., etc. Using this surprise element, the duo-pianists achieved a notable recognition both as peerless musicians and as entertainers in the strictest sense of the term.

For almost two decades, Ferrante and Teicher have been recording in the two extremes, as genuine classicists and as proponents of new dimensions in sound. It was in the latter phase, however, that their multitudinous fans were wont to regard the term, accepting the standard pianoforte recordings almost as supplemental tangents.

With the tremendous success of the motion picture theme recording, however, Ferrante and Teicher emerged as keyboard virtuosi of unexcelled stature. Besides their fans of long standing, a vast new audience of innumerable Ferrante and Teicher aficionados had accumulated. Today, they stand without peers in the realm of duo-pianists, their concert appearances filled to the rafters with S.R.O. crowds, a full schedule of guest appearances on television and, above all, an unbelievable schedule of recording dates.

In this long-playing recording, Ferrante and Teicher have returned to their “first love,” so to speak—the classics. Concerting their joint efforts on the works of Maurice Ravel and Claude Debussy, the team demonstrates the impeccable artistry, interpretation and individualistic technique that has always distinguished their playing and brought them unprecedented acclaim. From the moment they transport you through the haunting strains of the Bolero until the final chords of the Debussy nocturnes, Nuages and Fêtes are struck, you will become enraptured with the variance of moods which Ferrante and Teicher are able to summon with the magic of their twenty combined digits. Here, then, is the unsurpassed excellence of Ferrante and Teicher in the delightful program of Ravel and Debussy.

I have the ABC-Paramount reissue and the track sequence and liner notes are from that Lp.