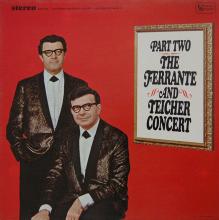 The Ferrante and Teicher Orchestra Conducted by NICK PERITO

Once again a wonderful performance by FERRANTE AND TEICHER is presented. All of the magic of these imaginative instrumentalists and wizards of the keyboard is captured for posterity, as is the delighted applause of a cheering audience spurring FERRANTE AND TEICHER into an impresario series of renditions.

Out title—PART TWO, THE FERRANTE AND TEICHER CONCERT—may sound somewhere austere, but the music contained herein is hardly that. For example, from the wonderful world of motion pictures comes a pair of spritely melodies, “Never On Sunday” and “Theme From The Apartment,” Broadway is represented by the touching “Ol’ Man River,” From “Showboat,” traditionals like “Dark Eyes” and “Ave Maria” are included, along with a memorable and definitive interpretation of Gerswhin’s “Rhapsody In Blue,” an opus that invariably stirs FERRANTE AND TEICHER fans into wild huzzahs.

Special mention must be made at this time about the colorful arrangements—the handiwork of FERRANTE AND TEICHER—and the lush, string-filled Ferrante And Teicher Orchestra, superbly conducted by their long-time associate, the brilliant young Nick Perito.

Here then is PART TWO, THE FERRANTE AND TEICHER CONCERT, just as you have requested. It showcases our keyboard geniuses and the repertoire that has won your hearts on their huge-grossing tours. It is a front-row seat to one of the most delightful music spectaculars that has ever caressed our America’s ears.