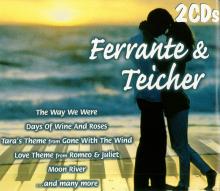 1997 2-CD set from Canada. Platinum Disc Corporation. Thanks to fan Chris Locke for providing the cover scan and track details!

"Tonight" is the edited version orginally released on 45rpm single. With regard to the various mixes of "Tonight," Chris writes:

The timing for the full version of Tonight (originally on the West
Side Story album) is 3:12.  The edited single version is 2:58 (not
much of an edit -- most of the bridge music between verses was cut).
On lp, the long version was also used on the Tenth Anniversary album
from 1970 as well as The Very Best of Ferrante and Teicher (1975),
and the single version was used on the Tonight album (1962) as well
as The Ferrante And Teicher Concert (1965).